New York, NY – As this year’s corporate-sponsored “Climate Week NYC” sputters on, New Economy Project and the Public Bank NYC coalition released an analysis estimating that NYC’s financial investments and cash deposits in big banks generate 757 kilotons of greenhouse gas emissions (GHG)* annually. This previously unreported figure would represent the second largest source of GHG emissions by sector in city government, if accounted for in the City’s GHG inventory, according to the analysis. 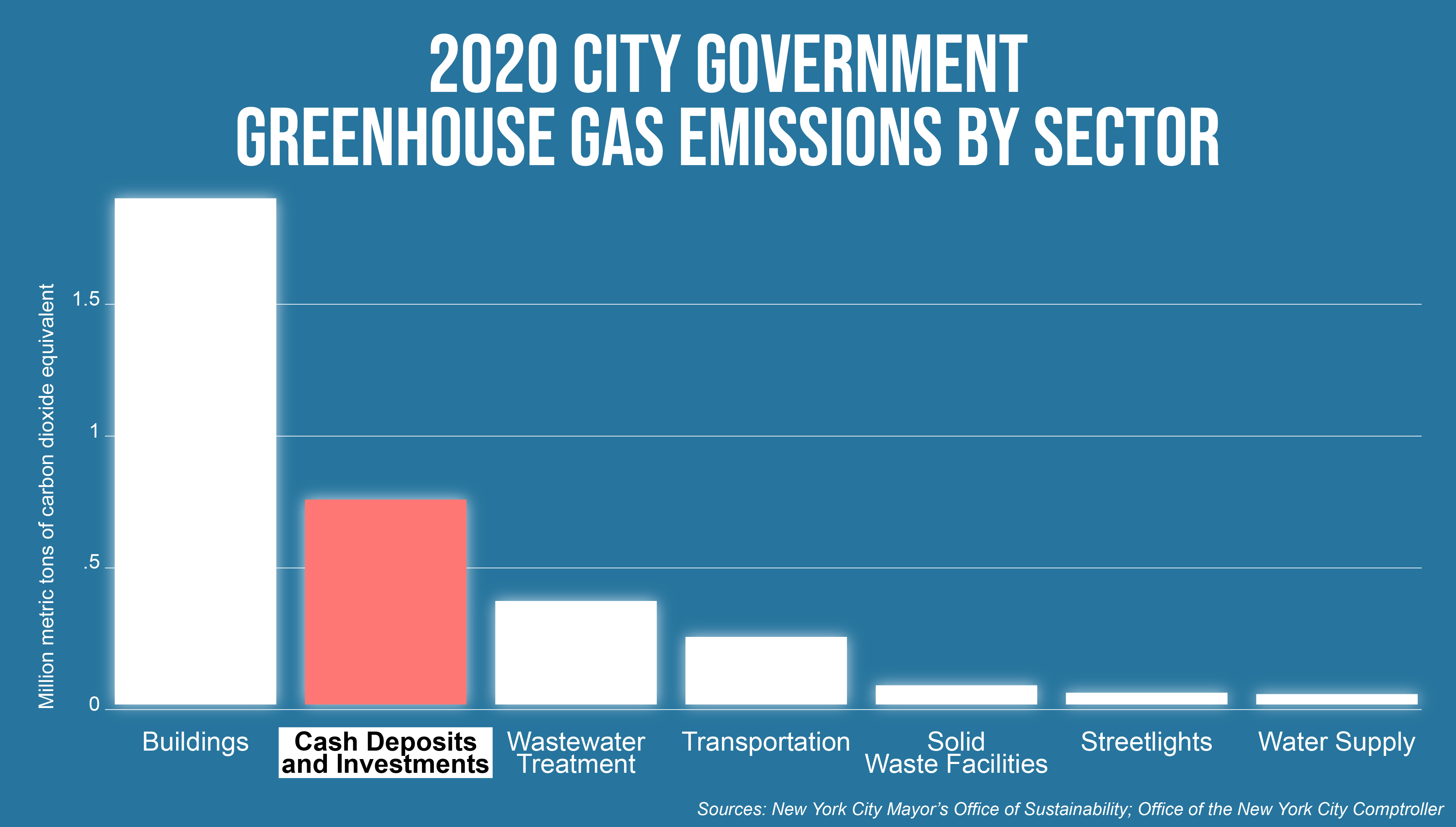 This year, the City will collect more than $100 billion in revenue from taxes, fees, and other sources. Virtually all of that money will flow through the City’s accounts with commercial banks, which use deposits to expand lending and investments, including in fossil fuels.

In fact, just three of the world’s top financiers of fossil fuels – Bank of America, Citibank, and JPMorgan Chase – hold more than 80% of NYC’s municipal deposits, according to the analysis. Collectively, these banks reportedly have invested $900 Billion in fossil fuels since 2016, with no end in sight. This week, JPMorgan Chase C.E.O. Jamie Dimon unironically told members of the House Financial Services Committee that halting new oil and gas production to fight climate change “would be the road to hell for America.”

“If money talks, then the City’s vast cash deposits in banks that bankroll fossil fuels say it all: Wall Street is dragging down the City’s efforts to combat the climate crisis,” said Tousif Ahsan, Public Bank Campaign Organizer at New Economy Project. “It’s past time the City pulled its deposits from climate-destroying Wall Street banks and established a public bank that will invest in community solar and other climate solutions in frontline Black, brown, and immigrant neighborhoods.”

The coalition based its analysis on The Carbon Bankroll Report, which developed a framework for uncovering the previously hidden toll of cash deposits and financial investments on the climate. As the authors of the report explain, cash deposits do not just sit passively in bank accounts; deposits are used to finance bank investments, most pertinently $4.6 trillion in fossil fuels over the past six years. The report found that, on average, for every billion dollars deposited with big banks, 86.83 kilotons of carbon dioxide are spewed into the atmosphere, exacerbating the climate crisis.

In 2021, NYC had a combined average daily balance of $8.5 billion with commercial banks authorized to hold city deposits, in addition to over $250 million in investments with asset management companies, according to the New Economy Project/Public Bank NYC analysis. Using the Carbon Bankroll framework, the coalition found that the City’s financial investments and cash deposits with banks generate 757 kilotons of GHG emissions annually – equivalent to adding 164,635 passenger vehicles to NYC’s streets (see methodology below).

“By depositing public dollars with Wall Street banks that continue to invest in the fossil fuel industry, the City is acting counter to its stated goal of combating the climate crisis,” said Kyle Giller, staff attorney at NYPIRG. “We will be unable to achieve these important goals if we continue to allow our public dollars to be used to fuel the oil and gas industry and exacerbate climate change. It’s time for the City to put its money where its mouth is and create a public bank.”

The Public Bank NYC coalition, which is composed of more than 40 community, labor, environmental, and cooperative organizations, is calling on the City to establish a public bank that will hold city deposits and reinvest in historically-redlined Black, brown, and immigrant communities. Unlike profit-seeking Wall Street banks, the coalition stresses, a public bank will be mission-driven to serve the public interest and help the City achieve critical public policy objectives, like reducing GHG emissions and promoting a just transition in historically-redlined neighborhoods of color.

“The climate crisis is being felt across New York, especially in low-income Black and Brown communities,” said Rebecca Garrard, Legislative Director at Citizen Action of NY. “It is unconscionable for our local governments to contribute to the climate emergency by continuing to do business with banks that put profit over people with no regard for our collective future. NYC needs to divest from Wall Street and invest in a public bank now!”

To win a public bank, groups are advocating for bold legislation at the state and city levels. They are urging Albany lawmakers to pass the New York Public Banking Act (S1762B/A8290A), which makes it easier for New York City and other local governments across the state to establish local public banks. And in the New York City Council, they are backing a growing legislative package (Introductions 498 and 499 and Resolution 203) that lays groundwork for what would be the country’s first municipal public bank.

Methodology: The climate impact of NYC’s bank deposits and investments was derived by applying the average GHG emissions generated by U.S. banks and asset management companies (as identified by South Pole, a climate solutions and project development firm, and published in The Climate Bankroll Report) to the City’s average daily cash deposits and end-of-fiscal-year investment balances. The average daily cash balance for 2021 was calculated using the NYC Comptroller’s Quarterly Cash Balance Report. The City’s investments in asset-backed securities, money market funds, and commercial paper for 2021 was reported in the Comptroller’s Annual Comprehensive Financial Report for Fiscal Year 2021. Total investments and cash deposits were multiplied by the carbon intensity coefficient, as reported in The Climate Bankroll Report (86.83 ktCO2e / $1 Billion). To compare the emissions generated by bank deposits and investments to other sectors of City government, the coalition used the NYC Mayor’s Office of Sustainability’s 2020 GHG Inventory. Equivalent car emissions are based on EPA estimates.