Click here for video of this morning’s news conference.

As the NYC Council’s Committee on Finance held its first hearing on a package of bills laying groundwork for a municipal bank, the Public Bank NYC coalition released new findings showing NYC’s “Designated Banks” – those authorized to hold municipal deposits – exacted more than $5 billion in predatory overdraft fees in 2020, as the COVID-19 pandemic devastated NYC and the country.

As has been widely reported, predatory overdraft fees siphon money from low-income people and people of color, including those hardest hit by COVID-19. Just 9 percent of all account holders pay 84 percent of the billions in overdraft fees that banks exact. Further, these account holders typically carry low balances – averaging less than $350 – and have relatively small monthly deposits.

Public Bank NYC, a broad-based coalition of more than 40 community, labor and cooperative groups joined Council Member Mark Levine and others to denounce actions by banks that gouge New Yorkers hardest hit by COVID-19, and to continue calling on NYC to establish a public bank that will invest in Black, brown and immigrant neighborhoods and help to ensure a just recovery. 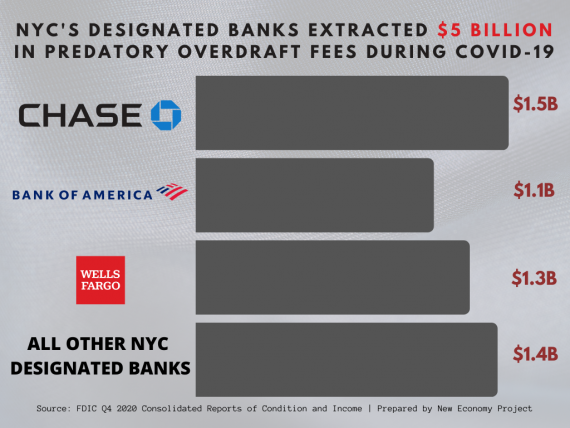 Each year, the City of New York collects tens of billions of dollars in revenue, from taxes and other sources, to fund public services. By law, this money is placed on deposit at a group of “designated” commercial banks chosen by the City’s Banking Commission, an otherwise obscure decision-making body made up of the Mayor, Comptroller and Commissioner of Finance.

Responses to Freedom of Information Law requests by New Economy Project show that the vast majority of New York City’s public funds are deposited in the largest Wall Street banks, including JPMorgan Chase, Bank of America, and Citibank.

Public Bank NYC is calling on the City to create its own publicly-owned financial institution that would hold municipal deposits and invest in cooperative and community-led economic development, including permanently-affordable housing, small and worker-owned businesses and other community needs. A broad and growing list of Council Members support the initiative, as do several leading Mayoral, Comptroller and Council candidates.

At today’s hearing, advocates pushed for a slate of bills they see as critical first steps toward public banking. Introductions 2099 and 2100, sponsored by Councilmember Mark Levine, would require NYC to provide the public with a quarterly summary of its accounts at “designated banks,” including balances and fees charged – data that has historically been made available to the public only through FOIL requests. Groups also voiced support for Introduction 2164, sponsored by Councilmember Helen Rosenthal, which would require the City’s Banking Commission to provide meaningful notice of its public meetings and report to the City Council on its determinations of which financial institutions are eligible to hold the city’s deposits.

In addition to the three bills, groups urged the City Council to pass Resolution 1600, which calls on the State Legislature and Governor to enact the New York Public Banking Act (S1762-A (Sanders)/A5782 (Pichardo)). More than 104 groups across the state have endorsed the Act, which would create a regulatory framework for local public banking—making it easier for cities, counties and regions to establish local public banks.

“We must seize this moment and act boldly to tackle the profound inequality exacerbated by this pandemic,” said Council Member Mark Levine. “Returning to the status quo is not an option. We need bold new tools to battle inequality, and advance racial and environmental justice. A public bank would tap the potential of the billions of dollars our city has on deposit right now at commercial banks. This is the public’s money and it could and should be invested in our communities. In green energy. In worker coops. In affordable housing. In community development credit unions. Instead, today, this money–our money–is sitting at institutions that are financing fossil fuel extraction, private prisons, weapons manufacturers, and other harmful industries. The time is now to create a banking institution that will do what Wall Street hasn’t and won’t: invest the public’s money to advance economic, racial, and environmental justice in New York City.”

“Today’s hearing represents an important step forward in the movement for a public bank to fundamentally transform our unfair, extractive economy,” said Deyanira Del Rio, co-director of New Economy Project, which coordinates the Public Bank NYC coalition. “Through a public bank, New York City can support permanently-affordable housing, small and worker-owned businesses, green infrastructure, and other equitable development in black and brown neighborhoods—and divest from Wall Street banks that are actively harming New Yorkers, our economy, and the planet.”

“From Citibank to Chase, these banks have exemplified the meaning of the word ‘greed’ as they take money from us everyday New Yorkers through ridiculous charges and invest in ways that harm our communities,” said Jamell Henderson, Crown Heights/Bed Stuy Chapter organizer with New York Communities for Change. “We have an opportunity to transform our financial industry by having a public bank of, by and for the people of our city.”

“Cooper Square Committee has worked with many tenants in the Lower East Side who have been subject to banks’ unchecked lending,” said Jodie Leidecker, organizer with Cooper Square Committee. “A public bank for NYC would leverage billions of dollars of our public money to reinvest in neighborhood-led development, strengthening our economy and advancing racial justice. In particular, our organization sees public banking as an opportunity to advance housing justice.