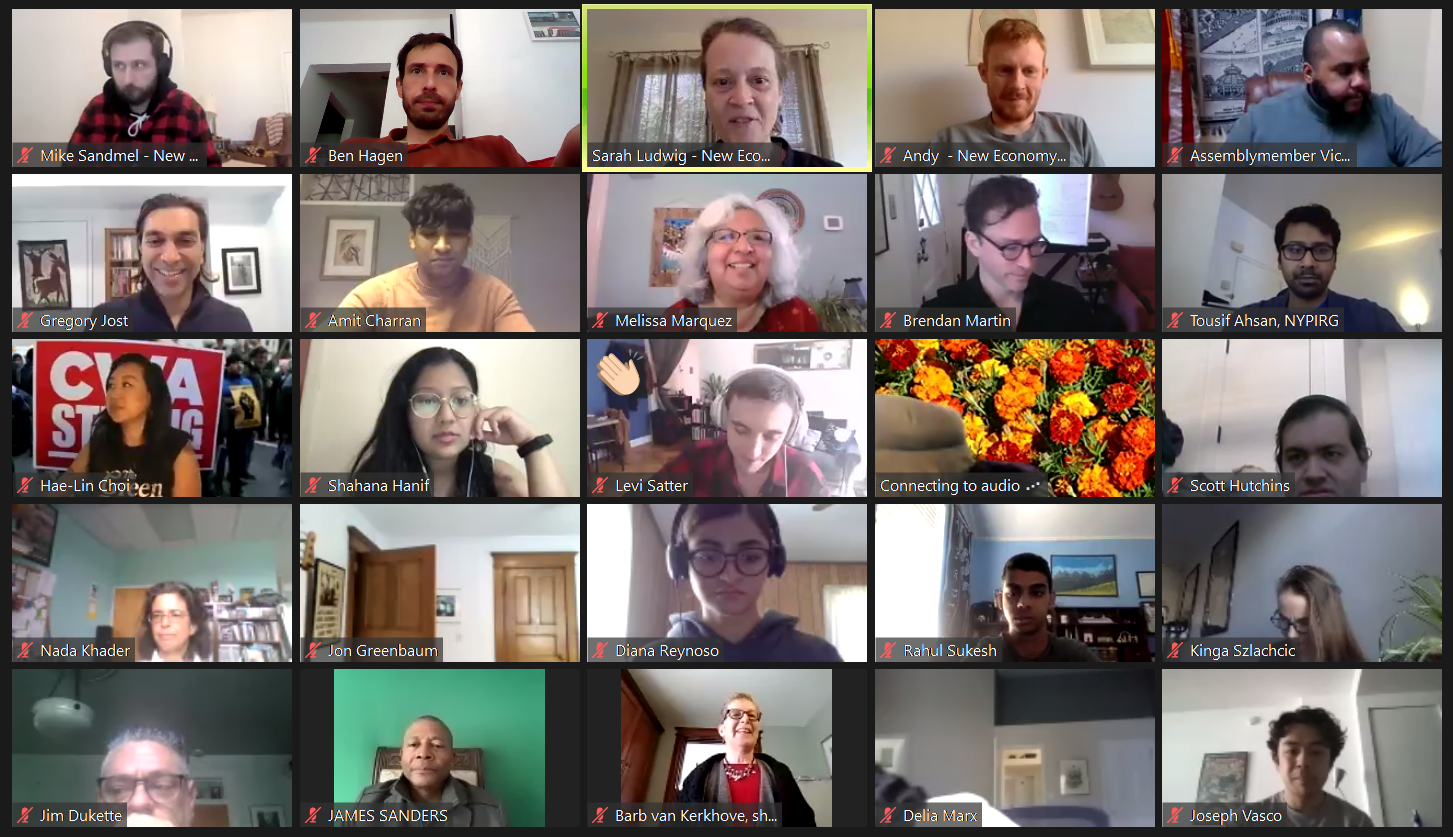 **Click here for a full video of the event**

Advocates urged Albany to build on major progressive victories in the budget, including increased taxes on the mega-rich and equitable legalization of cannabis. As local governments seek new ways to address the COVID-19 pandemic and climate crisis, they said, local public banks would be mission-driven and charter-bound to promote racial justice, cooperative and community-led development, and ecological sustainability. They called on New York to deliver needed support and consistent statewide guidance for local public banking efforts throughout the state.

Under current state law, localities seeking to establish public banks must apply for a commercial bank charter. This forces local governments to retrofit their public bank business models into a regulatory system that was designed for private, for-profit enterprises. California recently established a regulatory framework for local public banking, and several cities, including San Francisco, are now in the early stages of establishing municipal banks. Speakers said it is time for New York to help usher in democratic financial institutions that can meet the needs of New York’s communities, particularly those hardest hit by COVID-19.

“The coronavirus pandemic has devastated New York’s economy. Public banks offer a way to rebuild and prevent businesses, especially small businesses, from closing. Public banks also benefit underserved communities that have been, and continue to be, denied financial resources due to redlining. It gives long-suffering communities the chance to thrive and gain relief from debilitating debt,” said State Senator James Sanders Jr., Chair of the New York State Senate Committee on Banks. “The New York Public Banking Act would create the structural framework for municipalities to create public banks within its jurisdiction and allow the Department of Financial Services (DFS) to issue special-purpose public bank charters. It is time to serve the interest of the community, not just shareholders. It is time to advocate for a new normal that includes public banking.”

“It is absolutely critical that we pass the New York Public Banking Act. Not only will it help our communities, especially underserved communities of color, recover economically from the toll brought on by the pandemic, but it will also address and combat the inequality found in our financial system,” said Assemblymember Victor M. Pichardo, Chair of the New York State Assembly Standing Committee on Banks. “Many of our communities lack the proper financial institutions and support needed to sustain our communities and thanks to the support of advocacy groups, the New York Public Banking Act will ensure that the proper framework is available to establish local public banks that will support ethical, accountable financial services for all communities.”

“It’s high time New York stop depositing our public money in banks that are actively harming New Yorkers and New York communities. For starters, New York must divest from Wall Street banks that have systematically redlined Black and brown neighborhoods for decades, and that continue to extract wealth from New Yorkers and New York communities of color. Many banks that hold our money, including JPMorgan Chase and Citibank, finance destructive industries, from fossil fuels to the city’s worst landlords. The list goes on,” said Sarah Ludwig, Founder and Co-Director of New Economy Project, which coordinates the Public Bank NYC coalition. “The New York Public Banking Act paves the way for local jurisdictions to establish public banks that will accountably hold our public funds, with a clear public purpose and mandate to advance racial and economic justice.”

“For far too long, our reliance on Wall Street has fueled the rise of deep inequities in our state,” said Hae-Lin Choi, Political Director, Communication Workers of America District One. “The creation of local public banks would be a critical step forward in New York State’s recovery from the COVID-19 economic crisis, allowing us to reinvest billions in communities, create affordable housing and support small businesses that provide living wages. New Yorkers need and deserve public institutions whose missions are centered around serving people first–rather than greedy corporations that only prioritize their own bottom line.”

“New York State is at a crossroads. We have achieved watershed victories in the budget, fully funding education and raising long overdue taxes on millionaires. But our work is not done. With new revenue and new political will, let’s finish what we have started,” said Stanley Fritz, Political Director at Citizen Action of NY. “Through the creation of local, community-driven public banks, we can put predatory Wall Street out of business and make sure they no longer hold public money. And we can transform our economy to one that actually serves low income and Black and brown communities, rather than oppressing them.”

“Genesee Co-op FCU joined the Rochester Public Banking Coalition and supports the New York Public Banking Act because this legislation is good for community based financial institutions, like ours,” said Melissa Marquez, CEO of Genesee Co-op Federal Credit Union. “A public bank in Rochester can partner with local financial institutions through participation loans that finance important public initiatives. This legislation is forward thinking and will be so important for cities like Rochester, especially as we deploy public funds for the public good to create a just, post-pandemic recovery that ensures all people and neighborhoods prosper.”

“For too long, our communities have been zones of opportunity for outside capital to come in and extract,” said Brendan Martin of The Working World. “With local public banking, public money will be held and leveraged for the community, hugely expanding opportunities to build wealth that is locally controlled and reverse the tide of ever growing racial and social inequality.”

“For nearly a century, the banking industry has collectively failed the Bronx and communities of color across New York State and the nation. It’s time for New York to open the door to municipal public banking to make sure our public money works for the good of the people, especially those most harmed by historic and systemic racism like redlining,” said Gregory Jost of Banana Kelly Community Improvement Association. “The New York Public Banking Act represents a critical and tangible opportunity for municipalities around the state to divest from harmful, extractive and predatory practices and instead invest our deposits in the infrastructure that builds community ownership and wealth, such as community development credit unions, mutual housing associations, small and worker-owned businesses, and other grassroots initiatives.”

“Wall Street banks and fossil fuel corporations have driven the climate crisis for decades and we’ve paid the price here in New York and around the world,” said Amit Charran, NYPIRG student at Queens College. “We call on the state to pass the New York Public Banking Act this session so that we can take back our public money and invest in renewable energy, green jobs and a just, sustainable future.”

“There is no fairness without economic fairness,” said Henry Garrido, Executive Director, District Council 37, AFSCME. “Now, more than ever, it’s critical lower income communities have a place to turn where they secure a better financial future. Thank you Senator Sanders and Assemblyman Pichardo for championing the bill. I hope to see it pass through the legislature swiftly.”

“Public banking empowers localities to build socially just and equitable community wealth, thus enhancing the human dignity of each and everyone,” said David Sprintzen of the Ethical Humanist Society of Long Island.

“Money from municipal revenue should fund the public good. We support the creation of local public banks that would prioritize healthy, affordable housing over private profits.  A public bank here in NYC would be transparent and its mission in line with the needs of residents,” said Steve Herrick, Executive Director of Cooper Square Committee.

“A state as wealthy as New York, with all the expertise in banking that exists here, should have local public banks to serve the needs of our fellow residents,” said Ian Wilder, Executive Director of Long Island Housing Services. “We have seen from the bank crises of the past decade that the private banking system neither serves the New Yorkers who need them most nor provides the stability that our system depends on. Public banks would go far to ameliorate the inadequacies in the current banking system.”