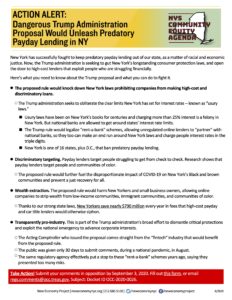 New York has successfully fought to keep predatory payday lending out of our state, as a matter of racial and economic justice. Now, the Trump administration is seeking to gut New York’s longstanding consumer protection laws, and open the door to high-cost lenders that exploit people who are struggling financially.

Here’s what you need to know about the Trump proposal and what you can do to fight it.

Transparently pro-industry. This is part of the Trump administration’s broad effort to dismantle critical protections and exploit the national emergency to advance corporate interests.

TAKE ACTION! Submit your comments in opposition by September 3, 2020. Fill out this form, or email regs.comments@occ.treas.gov, Subject: Docket ID OCC-2020-0026.