NEW YORK, NY – On Tuesday, representatives of community, labor and cooperative groups in the Public Bank NYC coalition were joined by city and state elected officials at a rally on Wall Street to unveil an ambitious legislative agenda to bring public banking to New York in 2022. 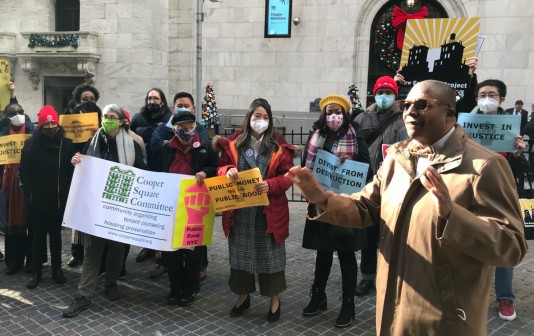 With a new city government preparing to take office and the state legislature set to return to Albany in January, the coalition urged lawmakers to make public banking a top priority to advance racial equity and a just recovery.

Public banks are owned by local governments and accountable to the public. Through public banking, the coalition says, NYC could deepen public support for community-led economic development initiatives, such as permanently affordable housing and small and worker-owned businesses, in communities hardest hit by the pandemic.

Currently, the city places billions of dollars on deposit with Wall Street banks, including JPMorgan Chase, Bank of America, and Wells Fargo. At the event, speakers underscored the ways in which many of these “designated banks” invest in fossil fuels, speculative real estate, and other destructive industries, while also failing to serve NYC neighborhoods equitably.

One example cited by the coalition: the city’s “designated banks” have drained more than a one billion dollars in predatory overdraft fees from struggling New Yorkers since the beginning of the pandemic, according to an updated analysis by New Economy Project, which coordinates the Public Bank NYC coalition.

In unveiling its agenda, the coalition pointed to actions needed from Albany and City Hall.

At the State level, they are calling for passage of the “NY Public Banking Act,” sponsored by NYS Senate Banks Chair James Sanders of Queens, who addressed the rally, and Assembly Banks Chair Patricia Fahy of Albany.

The bill creates an appropriate regulatory framework for local public banks. It authorizes New York’s financial regulator to issue special purpose public bank charters to local governments that demonstrate they have policies and procedures in place to ensure safety and soundness, public accountability, and ethical and responsible governance. Sixty-six state legislators and more than 110 groups from across New York support the bill.

At the city level, the coalition is urging Mayor-elect Adams and the incoming City Council to move aggressively toward the creation of a public bank, by passing the “People’s Bank Act,” a comprehensive legislative package that lays the foundation for a municipal public bank.

“Public banks offer a way to rebuild and prevent businesses, especially small businesses, from closing,” said NYS Senate Banks Committee Chair James Sanders Jr. “Public banks also benefit underserved communities who have been, and continue to be, denied financial resources due to redlining. It gives long-suffering communities the chance to thrive and gain relief from crippling debt. The New York Public Banking Act, would create the structural framework for municipalities to create public banks within its jurisdiction and allow the Department of Financial Services (DFS) to issue special-purpose public bank charters. It is time to serve the interest of the community, not just shareholders. It is time to advocate for a new normal that includes public banking.”

“Passage of the New York Public Banking Act will make way for the establishment of local public banks that will reinvest in New Yorkers and expand access to financial services,” said NYS Assemblymember Amanda Septimo. “I stand with advocates and colleagues in championing this opportunity for community-led investment that will transform the economic landscape for millions of New Yorkers.”

“Private banks have shown in every crisis that they are the first to cut and run at the sign of economic danger and the last to offer forgiveness or assistance to New York’s residents or businesses,” said NYS Assemblymember Emily Gallagher. “Capitalism’s need to justify a penny of investment with a dime of profit means private banks will never invest in the housing, green infrastructure, or future that we need unless it means New Yorkers are getting the short end of the stick. It’s high time that we end the racial, colonial, and ecological inequities that Wall Street is responsible for and create a People’s Bank of New York City today.”

“Our city’s current reliance on Wall Street fuels violence and precarity by making the rich richer and the poor poorer, creating financial insecurity for unbanked and underbanked working class New Yorkers, and reinforcing racist inequalities,” said NYC Council Member Tiffany Cabán. “With a public bank in place, we could invest in key pillars of safe, stable families and neighborhoods, such as permanently affordable housing, community controlled clean energy, infrastructure, worker-owned businesses, and community development credit unions. That is a recipe for the safe, healthy communities we all need and deserve.”

“Every New Yorker deserves access to banking,” said NYC Council Member-elect Shekar Krishnan. “An affordable loan for an immigrant-owned small business. A fair mortgage for a working class family. A simple savings account for a child dreaming of going to college. I’m proud to support ‘The People’s Bank Act’ to guarantee our communities receive these critical resources and flourish.”

“Throughout the pandemic, Wall Street banks have continued to systematically harm Black, brown and immigrant neighborhoods in our city,” said Tousif Ahsan, Campaign Organizer at New Economy Project. “With public banking, we can shift the balance of power back to our communities and start making investments for the public good. City and state lawmakers must take action to bring public banking to New York in 2022.”

“New York City’s communities of color were overwhelmingly hurt by the COVID-19 pandemic. As we rebuild and strengthen our city, it is incumbent upon our elected leaders to give New Yorkers every tool at their disposal,” said Henry Garrido, Executive Director, District Council 37, AFSCME. “A public bank would help promote racial equity as part of our recovery. We urge our leaders in Albany to make it happen.”

“For far too long, our reliance on Wall Street has fueled the rise of deep inequities in our state,” said Hae-Lin Choi, Political Director, Communications Workers of America District One. “The creation of local public banks would be a critical step forward in New York State’s recovery from the COVID-19 economic crisis, allowing us to reinvest billions in communities, create affordable housing and support small businesses that provide living wages. New Yorkers need and deserve public institutions whose missions are centered around serving people first–rather than greedy corporations that only prioritize their own bottom line.”

“The global climate crisis is an existential issue for myself and the students NYPIRG works with,” said Sadiya Hoque, a CUNY Brooklyn College student and NYPIRG Board Chair. “While science is telling us with increasing urgency that we need to divest from fossil fuels, Wall Street banks are using the public’s money to bankroll the fossil fuel industry. We are fighting for public banking here in New York to support local climate solutions like investments in green energy, sustainable small businesses, and climate resiliency projects led by the people.”

“During the pandemic, our credit union has been a lifeline for many of our members. We helped more than 500 small business owners apply for over $18 million in federal PPP loans, reaching very small and immigrant-owned businesses that the banks ignored. We restructured existing loans when our members lost jobs or needed more time to pay,” said Aissatou Barry-Fall, CEO of the Lower East Side People’s Federal Credit Union. “A public bank would partner with responsible lenders like ours to make more loans – and larger loans – than we could on our own; expand our services; and help create jobs and affordable housing in our communities.”.

“Worker co-operatives and small businesses are the heart of our communities, but Wall Street couldn’t care less,” said Gale Johnson, a Worker-owner of Hopewell Care Cooperative and NYC Network of Worker Cooperatives Advocacy Council Member. “As local businesses closed at alarming rates during the pandemic, Wall Street gave taxpayer funded loans to their preferred clients, instead of the businesses that needed it the most. Workplaces like mine that are owned by women, immigrants, and people of color need financial support to succeed and public banking is the best way to make that happen.”

“Tenants face poor conditions, lack of maintenance and repairs, construction-as-harassment, and lead dust contamination in buildings that should be long-term homes, but are turned into profit-making machines. Private banks fund these bad-acting landlords,” said Jodie Leidecker, organizer at Cooper Square Committee. “It is outrageous and unconscionable that the banks use our own tax dollars to fund these unscrupulous practices that disrupt stability in families and neighborhoods. A public bank is a wholesome alternative, supporting community land trusts and other stable housing.” 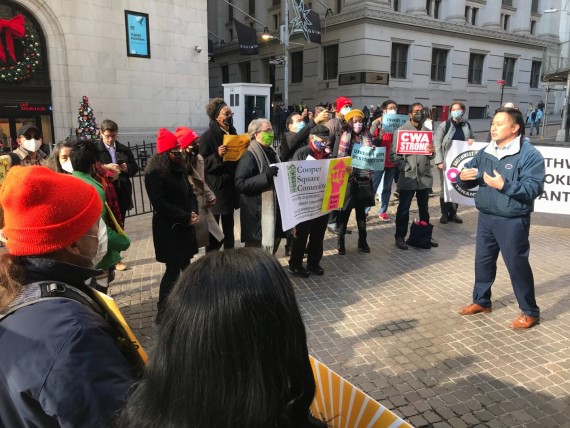 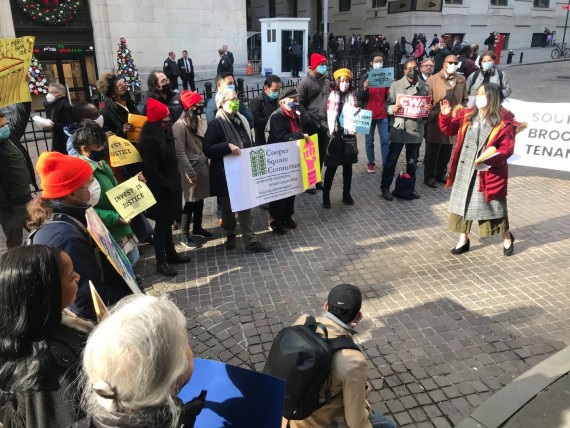