New Economy Project is pleased to have collaborated with The Vance Center for International Justice to present this timely panel and report on public banking around the world. We are grateful to The Vance Center for carrying out such an ambitious research project, which generated well over 100 pages of detailed survey data from seven public banks on four continents. We are excited to share key insights from the report with activists, policymakers and others working to bring public banking to New York. 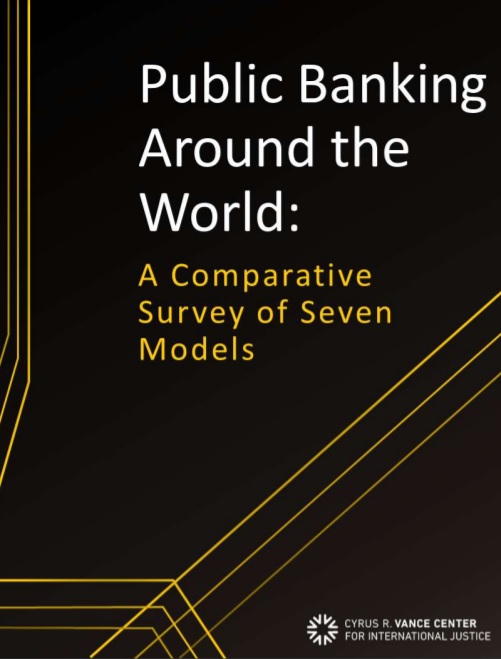 Dr. Thomas Marois, Senior Research Fellow, University College London
Dr. Thomas Marois is a Senior Research Fellow of Patient Finance and Public Banking at the University College London Institute for Innovation and Public Purpose and a Reader of Development Studies at SOAS University of London. Thomas is a political economist by training. His work centres on rethinking public banks’ catalytic potential for green and just transformations and for the provisioning of essential public services. His newest single-author book is titled Public Banks: Decarbonisation, Definancialisation, and Democratisation (Cambridge University Press 2021). He recently co-edited the open-access book titled Public Banks and Covid-19: Combatting the Pandemic with Public Finance (2020). Thomas has fostered a global research and advocacy programme on public banks by working collaboratively with academics, policymakers, CSOs/NGOs, and UN organisations. Thomas is a Research Associate at the Municipal Services Project, Canada, and sits on the Advisory Board of the US-based Public Banking Institute. He is of Canadian Métis ancestry.

Melissa Marquez, CEO, Genesee Co-Op Federal Credit Union
Melissa Marquez is the Chief Executive Officer of Genesee Co-op Federal Credit Union in Rochester, NY, a community development credit union & CDFI with $21 million in assets and 4000 members. She has been the CEO for 16 years. She is also the Board Treasurer of OWN Rochester, working on worker coop development and a board member of City Roots Community Land Trust. Melissa has an MS in Community Economic Development from Southern New Hampshire University and a BS in Political Science from Santa Clara University. Melissa has served on the Board of Directors of the National Federation of Community Development Credit Unions (now known as Inclusiv), the Institute for Community Economics and Abundance Cooperative Market.

Soledad Ovando, Assistant Manager of Public Affairs, Banco Estado, Chile
Soledad Ovando has over 24 years’ experience in the financial industry in small and micro-businesses, always at BancoEstado. She has served as the General Manager of BancoEstado Microempresas (BEME); Manager of small and medium enterprises at BancoEstado; and President of the Board of Directors of BEME. She was previously Counselor of the National Productivity Commission (CNP) where she promoted research and recommendations on increasing the participation of women in the workforce in Chile. She is a member of the Advisory Council of the Department of Industrial Civil Engineering of the University of Chile, and of the Commission for the Transparency and Efficiency of Public Spending. She has been named three times as one of the 100 women leaders by Women in Business and El Mercurio, and in 2010 was named Executive of the Year by Women in Business and the magazine, Capital. She was also recognized that same year as one of the Bicentennial Engineers, by the Network of Civil Industrial Engineers of the University of Chile. She is married and a mother of two daughters, and studied civil industrial engineering at the University of Chile.

Reena Agrawal Sahni, Shearman & Sterling LLP
Reena Agrawal Sahni is a partner in the global Financial Institutions Advisory & Financial Regulatory practice. She advises domestic and foreign banks and non-bank financial institutions on a range of issues, including U.S. bank regulation and financial services regulation. Reena also represents clients on corporate governance, OFAC and BSA/AML compliance, internal investigations and regulatory enforcement actions. In that capacity, she regularly deals with the Federal Reserve, the OCC, the FDIC, and the NYDFS, among other regulators.