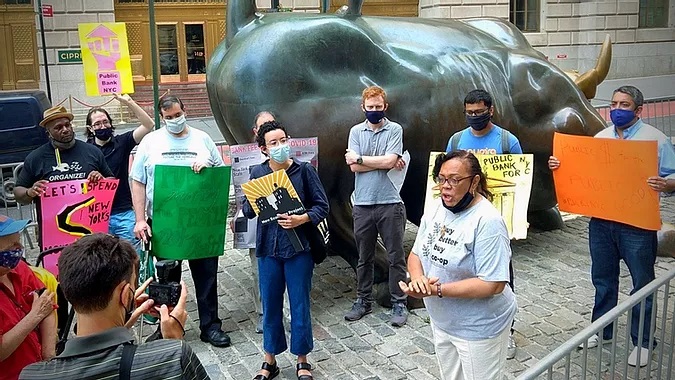 NEW YORK, NY – Today, members of the Public Bank NYC coalition held a news conference at the “Charging Bull” sculpture to call out Wall Street for mauling New Yorkers with predatory fees during the COVID-19 pandemic, and to call on Albany to pass the “NY Public Banking Act.”

At the event, racial and economic justice groups released a new analysis showing that banks have exacted more than $1.6 billion in an array of fees from New Yorkers, since New York declared a state of emergency last March. The groups stressed that banks’ overdraft fees, in particular, target low-income and Black and brown New Yorkers and push people out of mainstream banking. Statewide, banks exacted $1 billion in overdraft fees alone, since the start of the pandemic, according to the groups’ analysis. 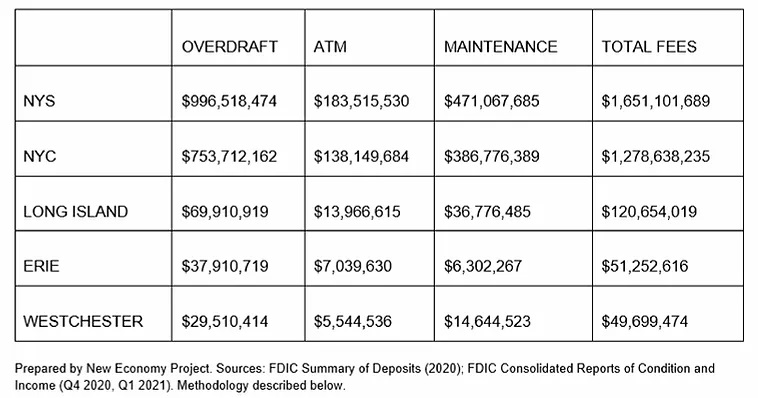 “As New Yorkers struggled, banks smuggled massive sums in predatory fees out of hard hit communities of color,” said Andy Morrison of New Economy Project, which prepared the analysis. “New York must divest from banks that are exploiting New Yorkers during the worst public health and economic crisis of our lifetimes, and get serious about public banking. We need Albany to pass the New York Public Banking Act this session.”

As has been widely reported, predatory overdraft fees disproportionately siphon money from low-income people and people of color, including those hardest hit by COVID-19. Just nine percent of all account holders pay 84 percent of the billions in overdraft fees that banks exact, according to the Center for Responsible Lending. These account holders typically carry low balances—averaging less than $350—and make relatively small monthly deposits.

As The American Prospect recently reported, the Federal Reserve “waiv[ed] overdraft fees for large banks during the early months of the pandemic to help them with liquidity problems.” Nevertheless, those same banks have continued to siphon massive amounts of money in overdraft fees from struggling New Yorkers during the COVID-19 crisis.

“It has never been more clear that we need to change the way our city banks. In the middle of a historic pandemic big banks exploited the most vulnerable New Yorkers by charging well over a billion dollars in predatory fees,” said Tousif Ahsan of NYPIRG. “We must take immediate steps toward establishing a public bank that would support New Yorkers and invest in neighborhoods of color during this crisis and beyond.”

Community development credit unions and other local financial institutions across the state have come out in support of local public banks, which they say would partner with them to help grow, expand and diversify their loans and services statewide. These community development financial institutions do not charge overdraft or other fees that advocates say are unfair, extractive and disproportionately harm low-income Black, brown and immigrant communities.

Speakers drew connections between Wall Street’s systematic extraction of wealth from low-income people and the ways in which big banks refuse to lend to struggling small and worker-owned businesses in communities of color hardest hit by the pandemic.

“These banks not only pummel New Yorkers with fees, they also do not lend to worker cooperatives,” said Elizabeth Ruiz of the NYC Network of Worker Cooperatives. “We need a public bank that would invest in small and worker-owned businesses and other needs in Black, brown and immigrant communities.”

The coalition underscored that JPMorgan Chase has been by far the worst offender when it comes to charging New Yorkers fees during the pandemic. Since March 2020, the bank has walloped New York City account holders with $949,028,514 in fees, including $588,137,829 in predatory overdraft fees. Advocates noted that JPMorgan Chase holds more New York City deposits than any other bank, according to responses to Freedom of Information Law requests by New Economy Project.

Public Bank NYC is calling on the City to create its own publicly-owned financial institution that would hold municipal deposits and reinvest in cooperative and community-led economic development, including permanently-affordable housing, small and worker-owned businesses and other community needs.

“As members of the East New York CLT, we are fighting for community-owned land as a needed strategy to build generational wealth,” said Albert Scott of East New York CLT. “Meanwhile, banks have continued to extract wealth from our communities, even as New Yorkers struggled during the pandemic. A public bank would invest in community land trusts and other wealth-building initiatives. Its time has come.”

At the news conference, the groups urged NYS Senate Majority Leader Andrea Stewart-Cousins and NYS Assembly Speaker Carl Heastie to pass the NY Public Banking Act (S1762A/A5782) this session. The bill, they said, would pave the way for NYC and other cities and counties across the state to charter local public banks.

“It is often the low-income communities of color who suffer the most in our City, whether in housing, health care, criminal justice or education. This also holds true in financial services, where private big banks take advantage of those most vulnerable,” said Andy Aujla of Communities Resist, Inc. “The banks that you see towering above us in New York City are propping up the same developers who use illegal means to push out low-income renters of color, which directly correlates with the housing crisis in our city. You cannot achieve housing justice without also addressing the underlying causes of poverty that are being exacerbated by private financial institutions.”

To assess the amount of bank fees charged in New York, the coalition examined Consolidated Reports of Condition and Income that the Federal Financial Institutions Examination Council (FFIEC) requires banks with at least $1 billion in assets to file on a quarterly basis. Banks report only the total amount in fees charged to all customers. The coalition estimated the amount of fees charged to New Yorkers based on the share of each bank’s total deposits held in New York branches, according to the Federal Deposit Insurance Corporation‘s Summary of Deposits Annual Survey.

Check out these videos from the event: