Posted by Will Spisak

Community land trusts (CLTs) are on the rise across New York State, working to give communities control over land and housing. New Economy Project recently organized a virtual learning exchange for NYC Community Land Initiative members and two of our upstate CLT neighbors: City Roots CLT, in Rochester, and the Fruit Belt CLT, in Buffalo.

Read on to learn more, and check out our previous exchanges with CLTs in Boston, California and Seattle. 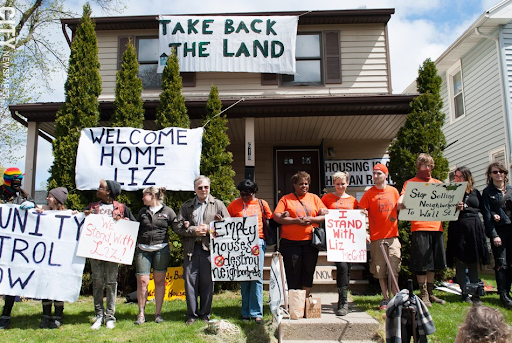 Launched in 2016, City Roots CLT traces its origins to work that Take Back the Land and other grassroots organizers led in the early 2010s to fight rampant foreclosures in Rochester. Through that work, local activists identified CLTs as a way to combat speculation and foreclosures. Today, City Roots CLT works on a range of projects, from affordable housing to mixed-use and commercial spaces and stewardship of a homeless encampment, known as Peace Village.

During the exchange, City Roots’ Executive Director, Joe Di Fiore, described partnerships the CLT has developed to achieve its mission. Joe was joined by Liz McGriff, a community organizer with the Citywide Tenants Union in Rochester. Together they described how the tenants union organizes tenants facing harassment or neglect by predatory landlords, while City Roots works when possible to integrate properties onto the CLT. This allows each group to focus on their respective strengths, and ensures that tenants are leading campaigns from the outset.

City Roots also works with the Rochester Land Bank to acquire homes that the City has foreclosed on for overdue tax debt–preserving them as permanently affordable housing. The Genesee Cooperative Federal Credit Union, a local financial cooperative, offers loans to people purchasing homes on CLT land. Similar to NYC, CLT activism in Rochester is connected to broader worker, food and financial co-ops, as well as a public banking effort aimed at increasing municipal support for cooperative economic development.

The Fruit Belt CLT was organized in 2017 to combat the rising tide of gentrification, sparked by the establishment of medical campuses and hospitals, in the historically Black Fruit Belt neighborhood on Buffalo’s east side. Initially, the CLT focused on acquiring vacant lots and developing affordable housing. Today the CLT is also working to develop green space and establish a food cooperative to provide fresh and healthy produce to local residents.

During the exchange, Stephanie Simeon, Executive Director of the Fruit Belt CLT, and Jamila Covington, Director of Community Impact & Engagement, described the CLT’s early organizing wins–including securing a temporary moratorium on the transfer of vacant lots in the Fruit Belt. The moratorium gave the CLT the time it needed to organize, incorporate, research properties, and line up resources it needed to acquire and develop its first properties for affordable housing, in 2018.

The CLT also won creation of a community advisory board to give Fruit Belt residents a voice in decision-making about land use and development, beyond the CLT. The board recently demonstrated its power when it denied a rezoning request for a 100-unit condo development in the neighborhood.

Athena Bernkopf, Project Coordinator of the East Harlem El Barrio CLT, described the CLT’s closing on its first properties, after years of organizing and negotiations with the City. Working with nonprofit developers Banana Kelly CIA and CATCH, the EHEBCLT is rehabilitating four multifamily buildings with 38 rental units, two commercial spaces, and one community space; and preparing tenants to become board members of the CLT and mutual housing association that will own and manage the buildings. Originally launched as a NYCCLI demonstration project, the EHEBCLT’s closing represents a major milestone for the citywide CLT movement.

With more than 15 CLTs in formation across the five boroughs, NYCCLI is advocating for policies–from Community Opportunity to Purchase legislation to expanded funding for CLTs–to bring more land and housing under community control.

After presentations, groups discussed shared priorities for the coming year, including passage of the NYS Tenant Opportunity to Purchase Act. Modeled on similar ordinances in Washington, D.C. and San Francisco, CA, TOPA would give tenant organizations a first right to purchase their buildings when landlords want to sell,  expanding the supply of permanently-affordable, community-controlled housing.

Thank you to the Fruit Belt CLT and City Roots CLT for the exciting discussion! We look forward to strengthening bonds between upstate and downstate CLTs, as we fight for housing justice and an equitable recovery.